In a new four-part series pro photographer Michael Snedic details the creative and technical decisions behind four very different landscape images. In this, the second installment, he explains how he captured this landscape in King’s Canyon, Northern Territory.

King’s Canyon is one of several iconic locations in the Northern Territory’s Red Centre and a ‘must see’ location for landscape photographers. It’s quite simply breathtaking.

I was there on a gorgeous sunny day in June, with cumulus clouds above. I’d left my tripod behind as there was enough light to easily hand-hold my camera and wide-angle lens. Decent light means you can use higher shutter speeds, which in turn gives the photographer a much higher chance of a sharp shot. When there are abundant clouds to shoot I like to use a wide-angle lens so I can make them part of the composition.

In this case I used a Nikon 14-24mm lens set at 14mm. A wide-angle lens lets you photograph a much broader view. Set at the widest focal length (or close to it), I love the effect the lens gives me when I’m shooting a sky filled with cumulus clouds. I was also shooting here with a full-frame SLR camera, so the full effect of a wide-angle lens could be used.

To achieve good depth-of-field I moved my camera’s focal point to one of the rocks about one third of the way into the scene and focused on it, all the while keeping my camera and lens as still as possible. I used a small aperture of f/16, to make sure I had everything in the scene in focus. As the light was so good, I was able to use an ISO setting of 200 and still achieve a high shutter speed. I always recommend the lowest ISO you can get away with because this will minimise the appearance of 'noise' in your images.

Sometimes you can be out in the field photographing a landscape without a tripod, and the light disappears. This can make for a moody shot, but to achieve a correct exposure the shutter speed can also drop dramatically. In this type of situation I recommend you find a nearby tree, rock or fence post to rest your camera on or against. Using this technique can really make the difference between a blurry shot and a sharp one. I set the camera’s mode to aperture priority so that whatever aperture I choose, the shutter speed automatically adjusts to the correct exposure. When you’re shooting in aperture priority mode, and the landscape you’re working in is quite dark, your shutter speed will automatically change to a lower speed.

For this image I chose matrix metering with my Nikon SLR. Canon calls it evaluative metering and other brands describe it as multi-segment, multi-zone or pattern. By choosing this metering mode the camera’s light meter is 'reading' the whole scene, not just one part of it. 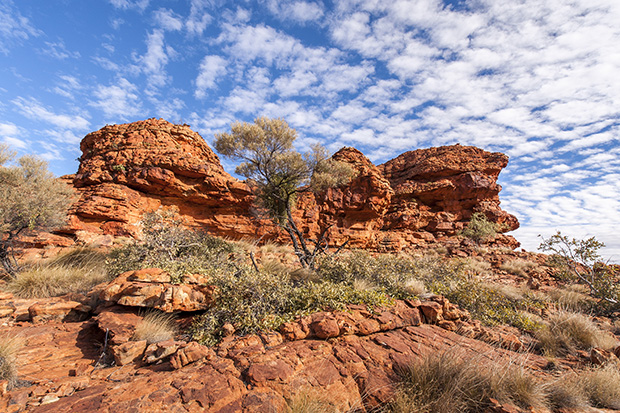 Also in this series: