Photographers in Australia are fortunate to have an amazing array of stunning landscapes to explore. At any time of day or night, and just about anywhere in this country, there are locations where you can hone your photographic skills. There are no specific rules for shooting landscapes – the weather conditions, locations and the equipment used can vary greatly. There are, however, some guidelines which can steer you in the right direction. Over the coming weeks I will present four different images, and explain some of the decisions I made and the strategies I used in shooting them. 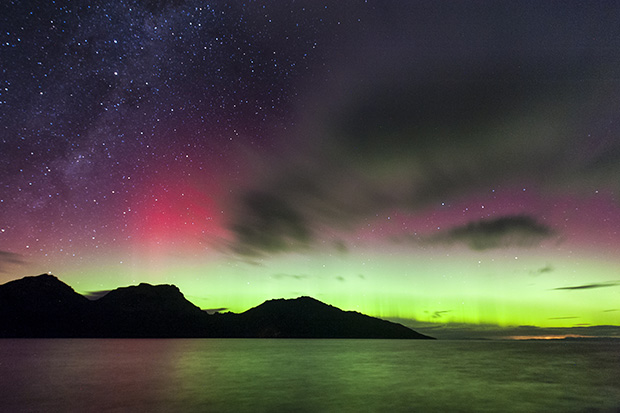 Aurora Australis, Coles Bay, Tasmania
The Aurora Australis image shown here was taken in March during a week-long photography workshop I was presenting in Tasmania. A mobile phone app alerted us when an Aurora Australis was due. It began to send alerts at quite a fast pace, which meant an Aurora was imminent! I’d been waiting many years for this photo opportunity so this was something I wasn’t going to let pass. After dark I eagerly watched the sky for signs of the Aurora.

Around 8pm a tinge of colour appeared in the sky. After I took one shot the colour became even more evident on the back of my camera’s LCD screen. The Hazard Mountains in Coles Bay, on the Freycinet Coast, were used as the backdrop for this image, and they couldn’t have been more perfect. As it was difficult to see the mountains, and autofocus doesn’t work well at night, I manually focused my camera to infinity. Then I pulled the focus back just slightly so the mountains would be fully in focus.

I set the camera’s ISO to 3200 to try to absorb the light from the night sky. I used an aperture of f/4.5, as there wasn’t much depth-of-field required in the image. Usually for a landscape I recommend using a smaller aperture (a higher number) like f/11 or f/16, to get as much of your scene in focus as possible. I used Manual mode for this scene, so all I needed to do to change the exposure was adjust the camera’s shutter speed. The higher the shutter speed, the darker the image; the lower the shutter speed, the brighter the image.

Using a sturdy tripod and decent-sized ball head (or a similarly sturdy head) is essential if you want to get sharp images of Auroras. Heavy camera bodies and wide-angled lenses, coupled with very slow shutter speeds can create blurry shots if your tripod and head aren’t able to properly support your gear. I use a carbon-fibre Gitzo tripod, which is very sturdy but not that heavy, combined with a strong Really Right Stuff ball head.

Not only does this combination provide great stability for my camera and lens, but the gear is precision-built and utterly reliable. Sometimes spending a bit more on quality equipment will present you with fewer headaches in the long run.

As the night progressed, it began to rain and looked as if the opportunity of a lifetime might be slipping by! Some of my workshop participants were getting ready to leave, but I urged them to wait as I know from experience that the weather conditions can change quickly.

Sure enough, after a few minutes the skies cleared, the rain stopped and we were able to make another attempt. This time the colours were much brighter – with bright greens, pinks, purples and reds. As well, we were able to make out the Milky Way. This was the moment photographers dream of! I

took a series of shots but this one captured the Aurora at its best. Words can’t describe the moment straight after I took this image – I knew I had a corker! Without a doubt this was the best landscape photography experience of my life so far.

Whether you’re using a compact camera or SLR, I recommend you use a sturdy tripod in most landscape photography situations. You can only hand-hold a camera when there’s plenty of light, otherwise you’ll end up with blurry images. Whether you’re shooting Auroras or star trails at night, sunrises and sunsets, a sturdy tripod and strong tripod head are essential. Using a remote shutter control or cable release will also minimise camera shake. If you don’t own either of these, you can use your camera’s self-timer to fire the shutter.

Don’t restrict your thinking when composing a scene. Shoot lots of variations when you’re starting out. I suggest you try different angles, zoom in and out, experiment with different lenses, and shoot in both portrait and landscape modes if a scene lends itself to both. You might be quite surprised at the variety of images you’ll end up with while shooting the same scene. With digital photography, there’s no cost involved in taking lots of different compositions.

Michael Snedic is a professional wildlife/nature photographer and professional photographic tutor. He is owner of WildNature Photo Expeditions, specialising in quality photography workshops and tours across Australia and overseas. His aim is to show participants the most amazing subjects and locations, while at the same time teaching the best techniques for photographing them.

Also in this series: