Q&A: Meet the photographer who turned his plane into a camera

Photographer Andrew Vukosav has launched his second solo exhibition, showcasing a series of images captured with his unique aerial photography setup: a single prop Cessna 182 with a Phase One camera and lens inserted into the underbelly of the fuselage.

Vukosav used the whole plane as a camera body, pitching it into position for each shot and using WiFi and an iPad as a liveview direct from the camera. During hundreds of hours of solo flights over remote parts of the Australian landscape, he captured more than 35,000 images, the best of which have made it into his new exhibition, Longitude, Latitude, Solitude.

We sat down for a chat with the lifestyle and fashion photographer to find out more about the unusual setup and his striking aerials. 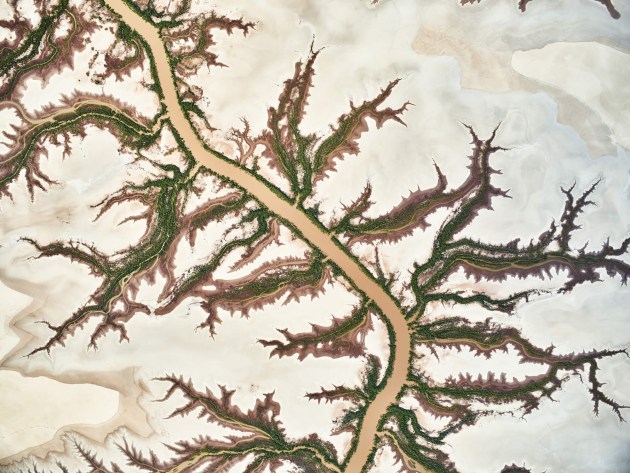 Your landscape work is very diﬀerent to your commercial work - does one influence the other or are you able to treat them as distinct?

My landscape work is my happy place, it creatively excites me like nothing else. It’s an indulgence that frees me from the structure and limitations that exist in in commercial photography. That said, I feel it focusses my commercial eye by the cleansing eﬀect I get from shooting my art.

I feel creatively fulfilled like never before, it’s something I’ve been endeavouring to find in my work for a very long time, having had a thirty-five-year career in commercial photography. In recent times a lot has changed, it’s becoming increasingly diﬃcult to “craft” images.

Clients are trying to cram more shots into the day. There’s less budget for everybody and it seems that the halcyon days of commercial photography are a distant memory, but along comes this art project that I optimistically believe is the beginning of a new chapter in my photography career.

How did the project come about?

This project started as a personal image series because whenever I flew, I was in awe of the Australian landscape from above. I was also inspired by our Indigenous artists and the way they saw and depicted their country. A lot of their paintings were aerial depictions of the landscape painted from visions seen while dreaming or astral travelling.

I assumed this as most of the artists had never been in an aircraft but are deeply spiritually connected to their country. One artist in particular named Simon Hogan from the “Spinifex Art Project” resonated with me because of this unique depiction of a landscape that I actually saw in-flight.

I first attempted to shoot by hand out of the window while flying the aircraft. This didn’t work at all because it was too hard to single handily fly the plane while hanging out the window. I spent a long time thinking of a cost eﬀective way of mounting a camera on the plane.

Can you explain some of the work that went into developing your unique on-board camera setup?

The camera took some time to work out. Everything to do with aviation needs to be certified, approved by CASA, signed for etc. It was diﬃcult to actually get an engineer to commit to the job of mounting a camera in the plane. To get around the problem of modifying the plane we found an existing inspection hole in the underbelly of the plane with enough room inside to create a camera mount.

We did a lot of testing to ascertain the amount of vibration etc and found that we didn’t need additional equipment to steady the camera. In the end we opted for a fairly clunky method of simply hard mounting the camera to the airframe and pointing the lens through the existing hole.

The camera is then connected via Wi-Fi to an iPad, with a hardwired push button camera trigger mounted to the yoke (steering wheel) in the plane.

What does a setup such as this bring to the images?

Since the camera is remotely mounted in the rear of the underbelly I have no physical way of looking through the traditional viewfinder. In addition to that the camera cannot move relative to the plane so the plane is effectively the camera.

In order to take the shot I line up the landscape through the window of the plane and shoot a series of images as I fly over the area I want to shoot. By not having a traditional viewfinder it takes away that decision-making process of framing up the shot and allows me to ‘dance’ with the landscape in a very unique way. I position the aircraft, shoot and see images on the iPad as they’re being shot.

This may seem a bit of an unorthodox way of shooting but I believe it adds a certain something to the images by allowing mother nature the chance to show her true architecture. As a photographer I find it a refreshing new way of creating images.

Solitude is a theme that runs throughout the exhibition - why is this integral to it?

Solitude was always there in one form or another, whether it was a solitary house that I would see in the desert, an animal roaming the landscape all on its own, or my own solitude.

There were times that contact with air traﬃc control was non-existent. Those were the more interesting times where the solitude felt threatening. If I’d gone down would anyone find me? It was kind of scary and exhilarating at the same time.

The solitude allowed me the rare indulgence of having nothing but time to myself, while flying the vastness of Australian skies. It made for really special moments of deep reflection while being eﬀectively voluntarily imprisoned in a tiny capsule over some of the most visually beautiful scenes that I’ve ever encountered.

I must say that I thought of David Bowie’s Space Oddity on more than one occasion. The titles to a lot of the works were snippets of thoughts I wrote while in flight.

What are you looking for in the landscape when you’re shooting aerials?

It’s largely a flight adventure of discovery, I’m drawn toward really remote parts of the Australian landscape. I have intentionally avoided any evidence of anything man made, so that nature could display its true majesty. I’ve also endeavoured to create abstract images of the natural world beneath me to allow the viewer to interact with the images in their own way.

It has intrigued me to see and discuss observations and comments people make when they look at my pictures. I find the images awaken the imagination of the viewer because of their sometimes-ambiguous content. I look for order in the randomness of the landscape. Patterns, textures, anything, it’s all fantastic.

What’s your favourite image from the series and why?

My favourite image is titled “shall we walk?”, it’s simply a shot of animal tracks on a Salt Lake but it makes me smile each time I look at it. It shows a collection of tracks from like-minded animals all following a similar route as one that ventured there earlier.

They go a long way into the lake then make a U-turn back to land, all except one that throws caution to the wind and goes where no other has dared to tread. Take a look at the image and you’ll see what I mean.

What message do you hope viewers will leave your exhibition with?

I would hope viewers will see my work and leave the exhibition with an enlightened appreciation of the amazing country in which we live. A country that should be protected.

Looking at my images makes me feel tiny in the massive vastness of our land. As tiny as we are, as humans we are doing our best to destroy this incredible gift. Instead, we need to do our best the conserve it and I’m optimistic that slowly we’re all coming around to think that way.

Longitude, Latitude, Solitude can be viewed by appointment at galleries in Melbourne. To find out more, visit cessnacam.com.