It's one of the most famous photos in the history of cricket, yet few people know the remarkable story of how photographer Ron Lovitt came to capture it. Bruce Postle, a long-time colleague of Lovitt's at Melbourne's The Age newspaper, recalls the events leading up to the climactic final wicket of the 1960 Tied Test and explains how the iconic image would never have been seen if not for Lovitt's steely nerves.

This is the remarkable story of the last exposed negative of the Tied Test Match played between Australia and the West Indies at the Brisbane Cricket Ground in 1960, which became what many consider to be the greatest cricket image in the history of the game.
The image was captured by Ron Lovitt  from Melbourne’s The Age newspaper using a camera nicknamed the 'Long Tom,' which was actually an old 5x4 Graflex body with a 101cm, f/8 focal length lens.

In those days you went to the ground with two magazines that held just 12 negatives to cover a day’s play in which about 95 eight-ball overs were bowled. This limitation meant that a massive amount of concentration was required and you only shot a picture when it was deemed necessary.

In this case the decision to shoot was more difficult than usual. Wes Hall, the great West Indian fast bowler, started the last over with the Australian score showing seven wickets for 227 and needing only six runs to win the match.

Five balls and loads of drama saw Australia make five runs and lose two wickets, leaving the scores tied. Meanwhile Ron Lovitt, along with all the other photographers, had taken his full quota of pictures for the day, using the entire two magazines before the last over began. Lovitt did have one remaining dark slide, a negative holder that held just two negatives with one on each side of the holder. However, Lovitt had a big problem. Earlier in the day, prior to the start of play, he had taken a picture of the Queensland Governor watching the start of the match for a feature article. Not wanting to use any of his precious 24 images that he had for the rest of the day’s play he used one frame of the dark slide holder to take the picture of the Governor. He took the dark slide holder off the back of the camera and put it back in his camera bag, forgetting to mark which side of the holder he had used.

Now, with just one over and eight balls left, he had to decide which side of the dark slide holder he would use. Loading it into the back of the camera, Lovitt must have sweated as he witnessed two wickets fall and then watched Wes Hall run the full length of the pitch to take a catch off his own bowling, while knocking Rohan Kanhai over as Kanhai was about to catch the ball.

Lovitt sat and watched while not taking a photo and said to Brisbane Courier Mail photographer Bob Barnes, "If nothing happens in the last two balls I will probably get the sack as I’m yet to take a photo."

Actually, history was about to unfold with the very next ball. Lovitt pressed the shutter as Ian Meckiff was run out by an amazing throw from the West Indies fieldsman Joe Solomon (left of picture) while the West Indies players raised their arms in celebration of the Test Match they thought they had won. But it was not to be. As they would soon learn, rather than winning, they had been part of the first tied Test Match in the history of cricket.

Ron Lovitt still had a lot on his mind. He had to catch a taxi back to the Courier Mail where he had to process his 24 negatives from the day’s play plus the two dark slide negatives. I can only imagine the pressure building as he sorted though the negatives that were floating in the fixer. Then he spotted the negative of the final shot he had taken and held it up to the light.

Bob Barnes, who was two rooms away processing his negatives, said the roar of delight was so loud it was as if Ron Lovitt was in the same room.

Ron Lovitt’s photo remains one of the most famous in the history of cricket. That he captured it at all is testament to his skill, patience, perseverence and incredible nerves of steel. 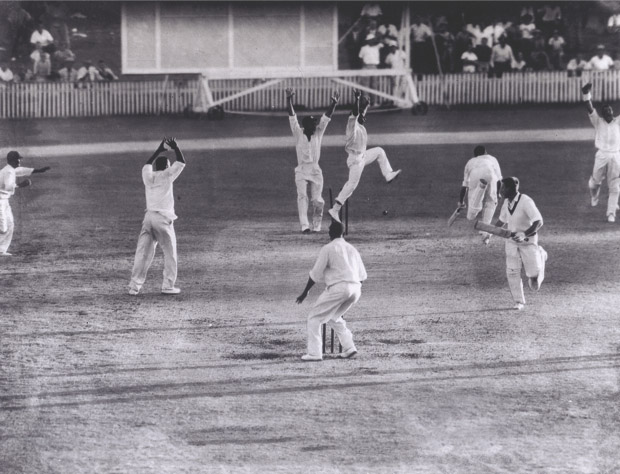 West Indies players celebrate as Australian batsman Ian Meckiff is run out on the final ball of the 1960 test match in Brisbane. The critical moment of the first tied test in the history of cricket was captured by Ron Lovitt, who watched the tense final eight-ball over (which included two other wickets and a dropped catch) with just one exposure left in his 5x4 Graflex camera called the 'Long Tom'. Photo by Ron Lovitt, The Age newspaper.