Our eyes see the world in a panoramic format. So it’s no surprise that panoramic pictures have been so popular throughout the history of photography. With today’s digital techniques, shooting a panorama is relatively easy with just about any camera.

But in the days before digital, you needed a special camera for the purpose. And here’s the deal: if you enjoy retro photography, you can still use many of these old cameras today, by shooting film in them, then scanning it to produce digital prints. Here’s a top ten list of some of the best panoramic cameras from the past, many of which can still be put to use.

1. The Kodak Panoram No.1 (pic above right)
The Panoram, which was first made in 1900, was a swing-lens camera. This meant that the lens was at one end of a short tube with a slit at the other end. The film was loaded around a semi-circular guide inside the body and, with the camera pointing forward, the lens pointed to one side. On exposure, the lens swung in an arc, building up its image on the film as it went. The camera also incorporated a spirit level and a viewfinder that reflected its image onto a magnifier on top of the body.

2. The Kodak Cirkut
Cirkut cameras were first made by the Rochester Panoramic Camera Company and later by Eastman Kodak between 1904 and 1932. They were capable of shooting a 360-degree view, but were mostly used to take 180-degree images. Because subjects at each end of the panorama were further away from the camera than those in front, the image seemed to bow in the middle. This was counteracted, when photographing large groups, by positioning everyone in a semicircle. That way, in the resulting picture, they appeared in a straight line. The cameras were most often used to shoot school pictures or large sports teams. 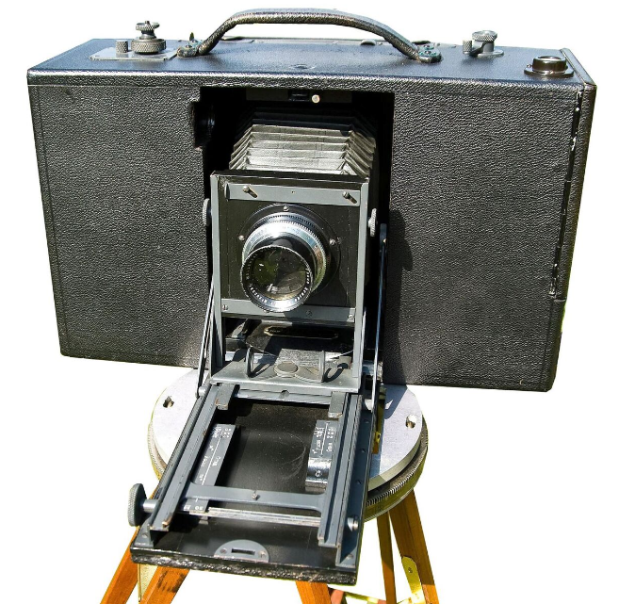 The No.6 Cirkut, one of the last in the panoramic series, made around 1932.

During the exposure, the camera rotated on its tripod by means of a built-in clockwork motor while the film moved past a slit behind the lens. Interchangeable gear wheels determined the length of film exposed, and a sliding scale on top of the camera indicated the size of gear wheel needed for the subject. The clockwork motor was adjustable to control the speed of rotation and hence the exposure time. Different models took different film sizes to offer panoramic pictures from 5 to 10 inches deep.

This is not an easy camera to use today because film is so scarce. But it can still be bought from dealers in America. Find details and suppliers here

A panoramic school picture, made in 1928, using a Kodak Cirkut.

3. The Al-Vista
Film for the Al-Vista is all but impossible to find today, so think of this camera purely as a collector’s item. It was made by the American Multiscope & Film Company in 1904 in a dozen different sizes, but the principle behind each model was much the same. It was a swing-lens camera, like the Kodak Panoram before it, in which the lens swung through 180 degrees to produce its panoramic image on film set around a curved frame inside the body. The speed of the lens’s sweep controlled the shutter speed, adjusted by vanes of different sizes attached to the internal spring-driven mechanism. The Al-Vista was unusual among cameras of this type for also offering different widths of image, according to the way a lever on the body top was set to control the sweep of the lens.

4. The FT-2
In 1958, the Russian Krasnogorsk Mechanical Factory used standard size 35mm film in a swing-lens panoramic camera for the first time. Unfortunately for any aspiring users today, the camera used its own special cassettes, into which the film needs to be pre-loaded from a normal 35mm cassette in a darkroom or changing bag.

The FT-2 is shaped like a flat brick. Inside, the film travels around a curved guide and shoots 12 pictures 24x105mm – the equivalent of three 35mm frames side by side. The film wind knob pulls the film from one cassette and pushes it into another. The lens is fixed focus with a fixed f/5 aperture, but three shutter speeds are offered in an unconventional way. On top of the body two small levers can be turned through 90 degrees. When both point down, the shutter speed is 1/400 second; left lever pointed down and right lever right pointed right gives 1/200 second; left lever pointed left and right lever pointed down gives 1/100 second. The faster the speed, the faster the lens swings. 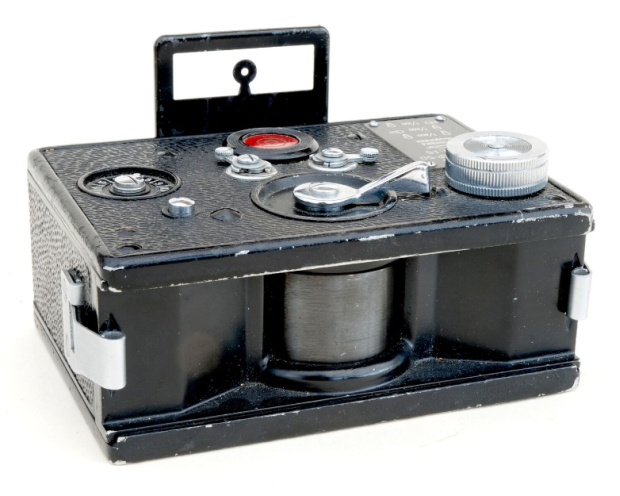 If you are up for reloading the FT-2’s special cassettes, then this is a fascinating camera for today’s retro photographer.

Digital print made from an FT-2 negative.

5. The Horizont
Made in 1967 by the same Russian factory as the FT-2, the Horizont addressed the special cassette problem by using 35mm in standard cassettes, making it far more practical to use today. The image size is 24x58mm, or the equivalent of one and a half 35mm frames, with an angle of view of 120 degrees.

The Horizont is another swing lens camera whose body, unlike the FT-2, is styled much more like a traditional 35mm camera, with shutter speeds of 1/30 – 1/125 second, and apertures from f/2.8 – f/16. The camera also offers an add-on wide-angle viewfinder that covers the full 120 degrees, plus a hand grip that fits to the base to ensure that the photographer’s out-of-focus fingers do not appear either side of the panoramic picture. 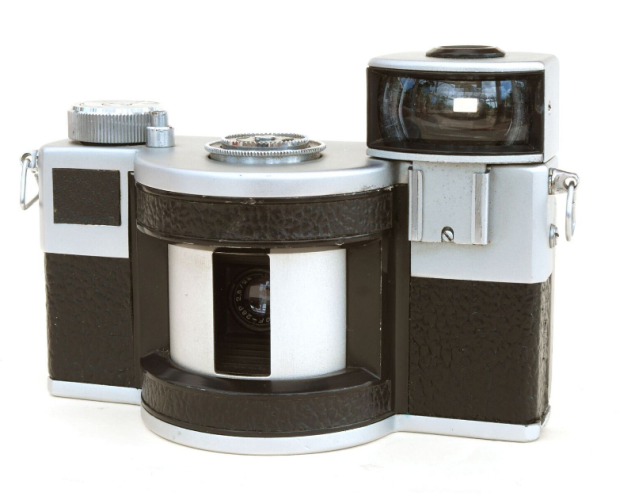 The Horizont, from the same factory as the FT-2.

The Horizont is tricky to load, but a pictorial guide inside the back cover shows how it must be done. Once you have mastered that, it’s a great camera to use even today.

Digital scan made from a Horizont negative.

6. The Horizon 202
In 1989 the Krasnogorsk Mechanical Factory updated the Horizont with the introduction of the Horizon series of cameras, the most common of which was, and still is, the Horizon 202. Unlike other cameras mentioned here, this one is still for sale new. Like the Horizont it takes pictures of 24x58mm with a 120 degree angle of view.

In place of the Horizont’s metal body, the Horizon is made from black injection-moulded plastic with a panoramic viewfinder built onto the top of the body. Like the Horizont, apertures run from f/2.8 – f/16, but a new range of shutter speeds has been added for 1/2 - 1/250 second. These are set on a double scale: yellow for slow speeds, white for fast, selected according to whether another lever on the camera top is set against a yellow or a white dot. The Horizon 202 was the first of many variants, some with only minor differences, produced by this company. 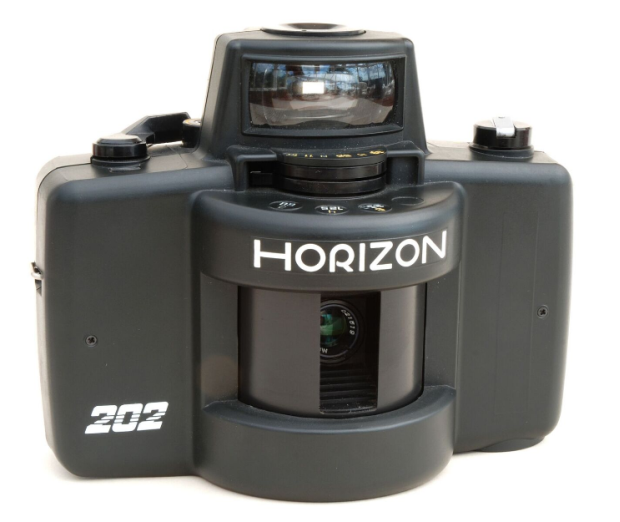 The Horizon 202 is a modern version of the older Horizont.

For the retro panoramic photographer, the Horizon is relatively easy to find and a delight to use. You can find the cameras for sale on eBay, as well as Amazon or by visiting http://shop.lomography.com/en/cameras/horizon-cameras.

Digital scan made from a Horizon negative.

7. The Widelux
Here’s another panoramic camera, versions of which can still be bought new today, although the original dates back to 1959.

The Widelux is yet another variation on the swing-lens design, this time made in Japan by the Panon Camera Company. It takes 24x59mm wide pictures on normal 35mm film, covering an angle of view of 140 degrees, and offering shutter speeds from 1/15 – 1/250 second. The lens is a Lux 26mm f/2.8. 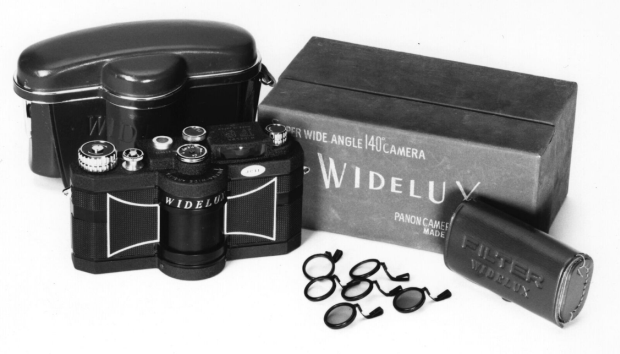 The company also still makes models for 120 roll film, as well as several variations on the 35mm model with only minor differences. You’ll find them for sale new on eBay.

8. The Globuscope
In 1981, the Globuscope, made by Globuscope Inc in America, took the old rotating camera idea from the Kodak Cirkut and updated it for 35mm film. In use today, it is capable of producing a complete 360 degree view with an image size of 24x150mm.

The camera is oval-shaped with a slit in one face and a large handle on the base. Behind the slit, a 25mm lens projects its image through another slit and onto the film. There are two shutter speeds, 1/200 second and 1/40 second, changed by inserting an alum key into the tripod bush. Apertures run from f/3.5 to f/16, plus a closed option. The camera is driven by a clockwork spring in the handle and, during exposure, the body revolves through 180, 360, 540 or 720 degrees, depending on how long the shutter button is depressed. As the body rotates, the film is moved past the slit at the back of the lens. 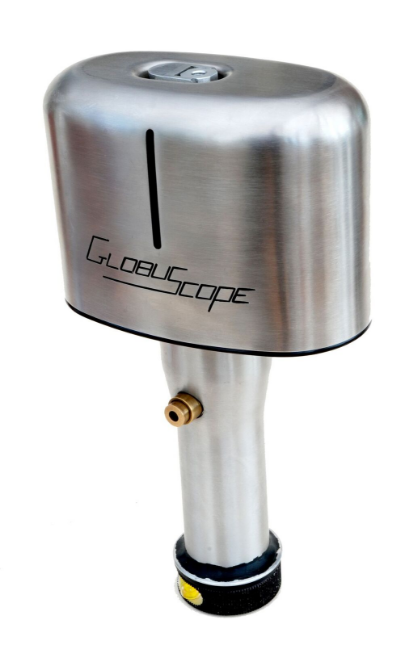 The Globuscope, made to revolve on its handle.

Today the cameras are hard to come by and expensive when you do find one. They tend to turn up in specialist auctions and in the hands of the some of the better classic camera dealers.

A digital scan from a 360-degree view transparency shot on a Globuscope in 1981, the year the camera was launched.

9. The Viscawide ST-D
Here we are back into the realms of the collectable camera, though one that is not impossible to use.

The Viscawide, made in 1961 by Taiyokoki Ltd in Japan, was the only 16mm subminiature swing-lens camera, made to shoot ten exposures, each one 10x52mm with a field of view of 120 degrees. The Lausar 25mm f/3.5 lens has apertures adjustable down to f/16, but the camera has only two shutter speeds, undesignated other than ‘H’ for high and ‘S’ for slow. In use, the film has to be first wound by a large knob, then the shutter tensioned by turning a wheel in the centre of the top plate and finally the exposure made by a lever on the side. A plate on the back indicates the appropriate exposures for 100 ASA speed (the forerunner of today’s ISO) film. 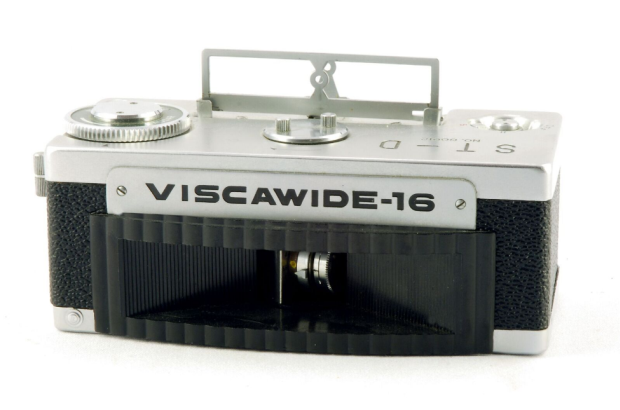 Viscawide cameras are rare to find and difficult to use unless you can find some 16mm film and load into the camera’s special cassettes.

10. The Photogrametry Underwater Panoramic Camera
Finally, a real rarity that you are unlikely see anywhere than on these pages. Made in 1950 by Photogrametry Inc in America, this was a panoramic camera expressly designed to take pictures under water.

Made of metal in the shape of a large drum, one third of its circumference was taken up by an expanse of convex glass, behind which the camera operated on the swing lens principle. It took 70mm wide sprocketed film, loaded into cassettes. The f/2.4 lens had apertures down to f/16, adjusted by a water-tight T-shaped lever that lifted up from the top. 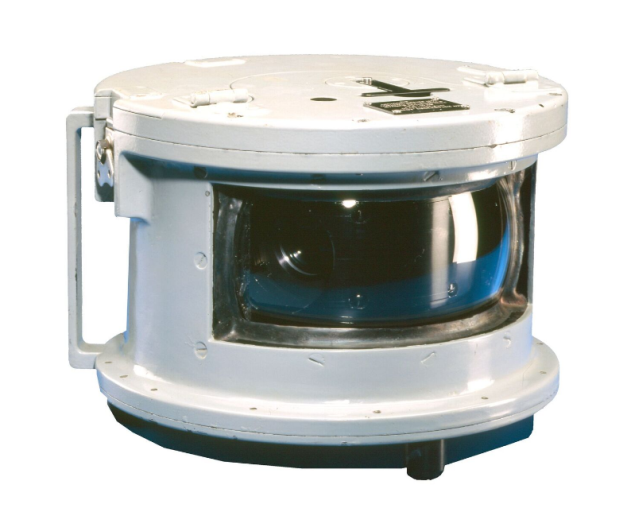 A super-rare underwater panoramic camera made by Photogrametry.

In use, a lever on the base was first advanced in a semi-circular sweep, then returned to its original position. The action tensioned the shutter and wound the film. The shutter was released by a large lever on the side of the body and, as it was depressed, the lens swung first in one direction, then back again, the exposure being made on the first sweep. The camera weighed nearly 12 kilograms, but would have been lighter to use under water.

The camera illustrated is the only one ever seen by the author. Finding and using such a beast would be difficult, to say the least.

Images and words by John Wade.

• John Wade has written, edited or contributed to more than 30 books on photographic history, photo techniques and social history. More details of his books can be found at www.johnwade.org