The overall winner of the Underwater Photographer of the Year 2020 has been announced as French photographer Greg Lecoeur, for his captivating photograph of crabeater seals swimming around an iceberg, Frozen Mobile Home. 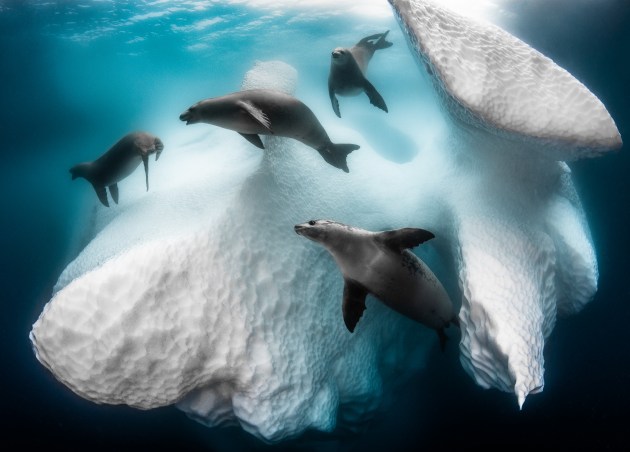 To capture the shot that triumphed over 5,500 entries, Lecoeur travelled to Antarctica by small yacht to allow him to more easily document the wildlife on the icebergs that drift with the varying polar currents.

The competition celebrates underwater photography from all over the world, with special categories for British photographers and for marine conservation. Since the inaugural competition in 2015, the number of entries has more than doubled. Now in its fifth year, the competition has become globally renowned with entries coming in from 70 different countries and winners’ images reaching millions of people around the world.

On his subject matter, Lecoeur said, “Massive and mysterious habitats, little is known about how wildlife thrives around these mobile homes. Icebergs fertilise the oceans by carrying nutrients from land that spark blooms of marine life and also provide homes for larger animals, like these crabeater seals.”

The judges of the competition were impressed by the movement and story that Lecoeur was able to encapsulate in his image.

Chair of the competition judges, Dr Alexander Mustard MBE, said of the work, “The motion of these seals and the ethereal landscape of the pitted iceberg takes our eyes on a journey through the frame and transports us to the icy ocean of Antarctica.”

Below you can see the winners of the other categories in the competition.

Awarded highly commended in the Wide Angle category of the competition, UK photographer Nicholas More has also been awarded British Underwater Photographer of the Year 2020.

More has been experimenting with motion blur pictures for several years because he likes how the technique gives an illusion of dynamism to his images. Speaking in detail about how he captured his image, Rabbit Fish Zoom Blur, “I came across a school of very friendlt Rabbit fish under a jetty and took lots of schooling shots. I started using the extensive zoom range of my Sigma 17-70 combined with a slow shutter speed to create zoom blur images… I hit the shutter and zoomed in at the same time, the flash freezing the central fish with the ambient light creating a Pop-Art like effect.”

Italian photographer Pasquale Vassallo has taken home the title of Marine Conservation Photographer of the Year 2020 for his perfectly-timed photo Last Dawn, Last Gasp, capturing the last moments of a tuna’s life as it is caught in a fishing boat’s net.

“This winter I accompanied some local fishermen,” said Vassallo, “Diving at dawn, I followed the nets as they were hauled up from the depths, revealing a conveyor belt of dead and dying wildlife, such as this little tuna gasping for life.”

This category of the competition gives a platform to photographers who see first-hand the issues that our ocean’s wildlife faces, such as climate change, plastic pollution and overfishing.

Commenting on the work, competition judge Peter Rowlands said, “If a picture paints a thousand words, then a great one asks a thousand questions.”

Nur Tucker from Wimbeldon, London has been awarded the prestigious title of the Most Promising British Underwater Photographer 2020 for her artistic photo of a seahorse, Commotion in the Ocean.

To take the photograph, Tucker experimented with an in-camera double exposure to create the illusion of waves surrounding the central figure of the seahorse. On her experimental process, Tucker said, “Over time, I have tried many different techniques, with varying degrees of success, including backlighting, side lighting, snooting, panning, double exposure and silhouette shots.”

Winner, Up & Coming Photographer of the Year 2020

The winning photograph in this category was taken by photographer Anita Kainrath. Kainrath’s image captures the movement in a shark nursery in Eleuthera in the Bahamas.

Speaking on the experience of taking her photo Kainrath said, “After less than one hour the little predators came closer and finally swam around my feet and my camera, bumping against me and trying to taste my strobes. They are curious little fellas but you need time to gain their trust and I love observing them in their natural habitat and that’s what I wanted to capture.”

The judges spoke highly of the image’s composition, as judge Peter Rowlands said, “It’s an image we dwelt on for quite a while; not because we were unsure about it but just because we liked looking at it."

German photographer Tobias Friedrich has won the Wrecks category of the competition with his image, The Engine.

Judge Martin Edge commented on the way Friedrich’s panoramic image captures the viewer’s attention, “The consistency of light and shade is stunning. The blue water colour in the far background gives the viewer a huge sense of depth perspective. The eye becomes absorbed by the panoramic from left to right with all the machinery of the wreck in full view.”

Lillian Koh has been announced as the winning photographer in this category for her skilfully composed portrait, Butterfly Effect.

Judge Peter Rowlands spoke to the quality of the image, stating, “Some images have instant appeal but it takes a quality one to sustain it. Winning images must continue to grow in appeal through the stages to rise above the pack. This image kept coming back and kept getting promoted for its originality, its perfection and delicacy.

A chance encounter with an Octopus and a floating soccer ball gave Pasquale Vassallo the opportunity to take the winning shot in the Behaviour category of the competition.

Judge Alex Mustard commented on the duality of his image Octopus Training, saying, “This image provokes a rollercoaster ride of emotions: at first it makes me happy, then sad… as you think, you enjoy seeing the cephalopod playfully investigating with this strange object in its environment, happily waving its arms in the water. Then the photo poignantly reminds us that oceans have, for too long, been a rubbish dump for all our old and unwanted trash.”

Malaysian photographer Man BD has been awarded first place in the Compact photography category for his image, Uluna Lily.

Man BD travelled to Uluna Lake in North Sulawesi, Indonesia to take his winning split-level shot. Judge Peter Rowlands commended BD on his composition, stating, “Split level shot with compact husings and their small domes are not easy but this perfectly lined split has a freshness and brightness which was always appealing.”

Judge Martin Edge applauded Klostermann for his striking image, saying, “This image was a winner right from the outset. The bokeh is nothing short of outstanding. The balance of the colours is superb, the eye contact is perfect, but what really caught my eye was the composition! How many of us viewing this image right now would have had the forethought to pace the subject in the very bottom of the left-hand corner? One of my favourites from the entire competition.”

The winner of the Black & White category in the competition is Mok Wai Hoe, whose image Layered Thoughts was acclaimed by judge Alex Mustard as one of the “most memorable” entries.

You can find out more about Underwater Photographer of the Year on the competition website.