Sydney photographer Gaetano Dario Gargiulo's striking image of an Octopus taking a selfie has taken out the Best in Show at the Ocean Art Underwater Photo Competition, organised by the Underwater Photography Guide. 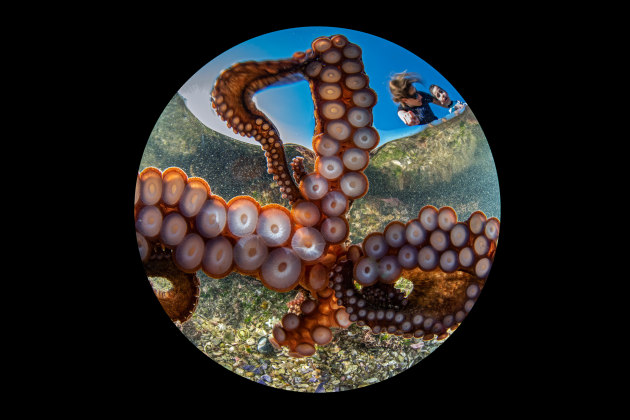 Gargiulo describes his unique image Day of the Tentacles as a 'once-in-a-lifetime' moment.

"On the day of the photo, I remained in the tide pool as the tide was too low to venture outside of its boundaries," he says.

"In one of the shallowest parts of the pool I noticed an octopus. I placed my camera near its den and the octopus started interacting with it. It came completely out of the den and to our amazement it started shooting pictures! My son (3 y.o. in the background) was very curious about it."

The photo was taken in the tide pools of Kamay Botany Bay National Park, New South Wales with a Nikon D850 and Nikon 8-15mm lens in an Isotta Housing. The image also won the Wide Angle category.

Now in its ninth year, the annual Ocean Art photo competition attracted thousands of images captured in oceans around the world.

Underwater photographers Tony Wu, Mark Strickland and Marty Snyderman judged the competition this year, which had a prize pool of over $45,000.

The competition attracted a huge variety of work, from animal behavior, displays of ingenious photographic techniques, and conservation scenes that reflect on not just the need to conserve our planet, but our species as well.