A few years back I was considering purchasing a done as I’d occasionally get requests from clients for aerial images to accompany my more traditional err.. ‘land based’ photography.

The drone offerings on the market at the time were OK – but to get really decent images you’d need to purchase the expensive higher end machines that were rapidly being superseded by the next generation.

To solve the problem, I’d end up hiring a drone person (who would also have to do all the CASA form filling), or I’d stick my camera on the end of a fully extended monopod with a long cable release to get a bit more height.

However, the new DJI Mini 3 Pro has completely changed my opinion on the viability of doing my own drone work. The previous model was only 12MP. Now it’s an impressive 48MP. Should I throw my 45MP Canon R5 away and just hand hold a drone and shoot everything on that? Well, let's take a look, and more on the all important image quality later.

As you can see in the photos – the Mini 3 Pro is super compact, yet it still feels very high quality and strong. The way the rotor arms fold out is brilliant. Maintenance wise, I had to swap out one of the eight blades and that required a small (included) screwdriver and only two minutes of time.

Onboard, DJI packs in its Tri-Directional Obstacle Sensing cameras which, as the name suggests, sense obstacles in front, behind and underneath the drone. The 24mm (35mm SLR format equivalent) f1.7 camera is housed in an omni-directional housing that is quite ingenious, and allows it to be controlled in both horizontal or vertical formats, as well as pan up / down and shoot directly down.

Initially I couldn't quite grasp why you would want to shoot vertically, but in conversations with a pro-level drone operator he told me he now shoots everything exclusively in vertical format as the majority of his work is shown on phones and social media.

Finally, the dedicated controller is close to perfect and feels very responsive and sturdy. If I was to offer a criticism, it's that the detachable joysticks slot into wells in the bottom of the controller. You probably won’t lose them, but it would be nice to have a bonus stick in case you did. Also, the touch screen is quite bright, but it would be good to have some sort of hood around it or an anti-reflective coating as it can be tricky to see in full sunlight.

One of the most nailbiting parts of any drone flight is taking off and landing. With the Mini 3 Pro, this is completely automatic at the press of a button. It takes off and hovers at approximately 1 metre waiting patiently for you to take over the controls.

To land you have two options – either land on the current spot you are hovering over, or ‘return to home’ i.e. the original landing place. WHATEVER YOU DO – DO NOT choose ‘original takeoff place’ if you are on a boat. A friend’s associate used ‘return to home’ while fishing and the drone landed correctly from where it took off – about 20 meters away from the boat and into the water because the boat had drifted. Good bye drone!

All this means the controls are almost idiot proof. If you have ever played PlayStation then you will have no problem adapting very quickly to the controls. It should only take 10 minutes to master flight controls and find yourself zipping around the sky.

The drone is also incredibly stable in flight. It really is as simple as up down / rotate on axis Left and Right / Forward Backward / Roll Left Right. Other switches at your fingertips control the camera's direction and take photo / start recording to the onboard Micro SD card which is located on the back of the drone.

When iot comes to flight modes, there are three – C for cinema, N for Normal, and S for Sport. You can think of them as Slow (approx. 20kph), Medium (35kph) and Fast (55kph). Slow and Medium take advantage of the Mini 3 Pro's obstacle avoidance technology and will warn you, and even slow the drone down, to avoid anything in the way.

The ‘Sport’ setting has no warnings or sensors operating. I found once I got a hang of it I quite enjoyed zooming the drone at full speed in S mode and ‘air drifting’ around corners. As for the app and camera menus, they require a lot more study. Perhaps an hour of fiddling around and familiarising everything should do the trick for most users. 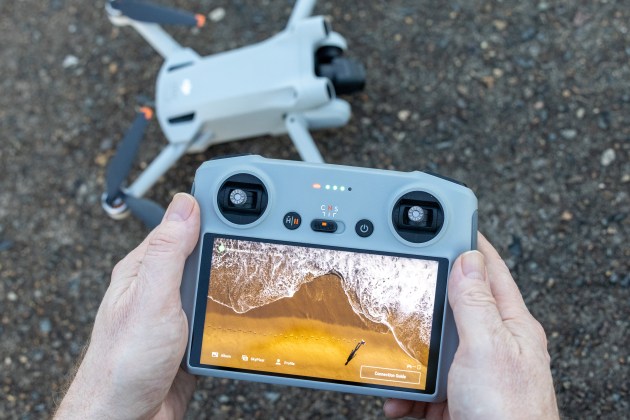 Finally, the instructions that come with the drone are err...ridiculous. They are scant on detail and you need a microscope to read them. Fortunately, the touchscreen controller has a variety of built in tutorials to get you underway. Or, you can view the manual online.

And lastly, a word of warning. On the first flight I needed to update the software and was out in a field on private property. It was a huge download and a fairly long install time. So I suggest doing this this at home with WiFi before setting out.

The DJI tech heads have done a great job with image quality as per the ‘image parameters’. What I mean by this is seeing an uncropped image on a 5K screen looks great.

However when you start to zoom in / crop – you very quickly see the limitations of the 1/1.3” (12mm) sensor and what would be a very cheap lens (and the reason high-end heavy lenses cost $3000+) There was heavy purple and magenta fringing from white objects, which is something you commonly see with expensive lenses when shooting directly into the sun and looking at narrow objects such as powerlines or branches. That said, the quick fix to this is to apply lens corrections in Lightroom.

The other thing you'll likely notice when zooming in is noise, especially if you start to use high ISO. However, as it is illegal to fly in low light or at night, and the aperture is a fixed f1.7 - you will almost always be shooting at 100.

Unlike many small drones, you can shoot in both auto and manual modes in raw which is nice, however you don't have any control over aperture.

It would have been nice to add this as you can notice image sharpness falloff on the image edges due to the fixed f1.7 lens, something that could be corrected simply by being able to stop down, but considering this is an entry-level device I can't complain too much. As for video, the 4K images looked excellent for this price range.

Ultimately, I think the image quality on the Mavic 3 Pro is very good and when seen on most screens (phone / laptop etc) you won’t notice aberrations. Just make sure you crop in-camera by positioning the drone exactly where you want.

If you were shooting a feature film, sure you’d use a $40K drone set up. But for 80% of other uses, I think it is a solid performer for both video and stills, and it is a very cheap way to get ‘wow factor’ for your image package if you work commercially.

You can buy the Mavic 3 Pro with an RC-N1 Controller, which attaches to your phone, for $1119.00. Or, the drone plus a DJI RC Controller for $1299. A very worthy inclusion is the ‘Fly More Kit’ for $259. With this, you get a perfect sized leather(ette?) storage / carry pouch, two extra batteries, a triple battery charger, and even more replacement propellers.

When it comes to flight time, one battery can get you approx. 25-30 mins flying time (note it's rated by DJI for 34 mins) depending on how hard and fast you fly. You also have to allow return time which will cause the controller to beep madly at you if you are not returning home to land.

However, keep in mind that if you purchase the ‘battery plus’ (approx. 45 mins flight time) option the drone is now in the above 250g Micro Drone category, which changes how CASA regulates its use.

Excellent. With three different ‘speeds’ and a built-in obstacle avoidance system, the Mavic 3 Pro is easy for novices yet still fun for more experienced pilots. It even has a range of over 10km!

Strong and sturdy for its weight. It's quick and easy to swap out batteries, and the drone packs away easily.

More than enough, including a number of intelligent flight modes, built-in tracking and smart return-to-home functionality. For more features, I’d expect to pay much more and need a larger drone.

Really great for the 1/1.3 inch sensor and the drone's lightweight lens' limitations.

The DJI Mini 3 Pro is quite possibly the best consumer drone currently on the market. When you start looking at making the jump to commercial options, the cost can quickly get astronomical. So at a starting point of $1,119, this drone is a steal, and especially so for people who don't plan to fly a huge amount.