One of the hardest things about being good at something is trying to convince people you can also do other things well too. Just look at Michael Jordan– the greatest of all time on the basketball court, but when he decided to rebrand himself as a professional baseball player at 31 he was roundly bagged. Sir Ian Botham, Jarrod Hayne, the list goes on.

To a lesser extent, it's this same baggage that hangs over the new Panasonic GH5. The world's first mirrorless camera with 4K video recording features, the GH4 offered excellent high quality video that helped make it a firm favourite with run-and gun filming operations. But the video features were so good that people seemingly forgot just how good the camera was for stills as well. 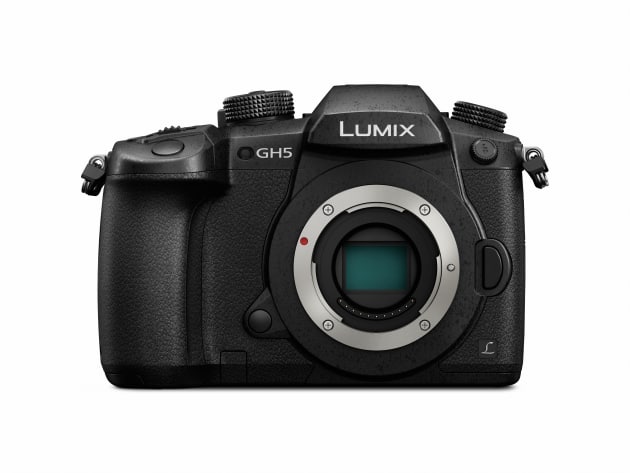 There little chance of this happening with it's successor, the GH5. While the design has much in common with the GH4, inside it's a brand-new camera that feels like the result of two and a half years of user-feedback influencing it's design. Better still, those not insubstantial video features now genuinely enhance the stills capabilities.
Let's start with the body. It's been beefed up to account for upgraded recording specifications and more ports, including a full size HDMI port, but the real world weight increase is minimal (560g vs 725g). The button layout on the top is largely the same, save for a slight shuffle to make room for one which has moved from the back of the camera and doubled in size: the dedicated recording button. You can now find this on the top.
Panasonic have also ditched the pop-up flash, which has allowed the onboard microphone to move from the rear of the camera to the front. True, most videographers will use their own dedicated audio equipment, but it's a smart move. The downside of all this shuffling is the display button has moved up and to the right– occasionally I found the ball of my thumb hitting it, which could be a bit of a pain.
One of the features that has benefits to both video and stills shooters is the new five-axis image stabilisation system. Combining internal stabilisation with in-lens stabilisation when shooting with own-brand lenses means video footage is noticeably more stable, and although a tripod or gimbal is still probably a necessity for video shooting, It was something I was thankful for while shooting from a helicopter above Queenstown.
The GH5 sits in a rarefied space, one of the few cameras on the market that can shoot and internally record 4K footage at above 30 frames per second. The GH5 gains the ability to shoot UHD 4K video at 48, 50 and 59.94p. 60p is great for capturing fast movement, rather than giving the blurred impression of movement that 24p can often give. And if this isn't fast enough, there's 1080p video at an impressive 180 frames a second too.
Of interest to stills photographers is the new 6K video feature that lets you pull 18 megapixel stills out of a short burst of 6K footage. It probably doesn't sound like much on paper, but the previous 4K video mode only allowed for 8 megapixel stills: having 18 megapixels gives you a lot more wiggle room for cropping in post. At the moment it's a stills only feature, but we're told that later in the year Panasonic will add 6K Anamorphic Mode, which will allow for the capture of video sequences.
The downside of all this high resolution video is processing and storage, and while it's not quick to thumb through a burst of 18MP shots, the feature does work relatively well. Thankfully on the storage side there's now dual SD slots and although you'll want to have ample fast SD cards at the ready, the new Venus Engine image processor has two-thirds greater power than that in the GH4. The work flow potential of 6K video is huge– imagine a wedding photographer able to record the entire ring swapping ceremony and then cherrypicking the best shots (in camera!) on the fly. It could be a gamechanger.
As you might expect from a fifth-generation product, the Panasonic GH5 is a mature piece of kit and above all, a worthy flagship body. There's not really anything quite like it on the market, certainly for it's price, and despite having a feature-set that can be initially a bit overwhelming, the GH5 rewards both photographers and videographers equally– which is no mean feat.

Handling (3 1/2 stars)
The Panasonic GH5 is a 'busy' camera with plenty of external buttons for the major (and not so major) settings. It is probably nudging towards SLR size, but that does make it reassuringly comfortable to hold.
Features (5 stars)
This is where the GH5 excels. The stills features, and especially 6K video, are useful, and the video features are class-leading in a camera in this price bracket. If you want one camera to do it all, this is the one.
Exposure (5 stars)
On the whole the GH5 coped well with scenes featuring a wide dynamic range as well as those in challenging low-light situations throughout testing.
Image quality (4 stars)
The sensor on the GH5 delivers excellent image quality, even at higher ISO's of 6400 and above, but we must admit we would have loved to have seen a bigger sensor as it would make the 6K video feature that much better. The video performance however is simply excellent.
Value for money (5 stars)
The GH5 offers plenty of bang for your buck. Few cameras can offer it's depth of features and it seemingly outpaces most competitor products two or three times as expensive.

We loved the GH5. This is a product that speaks to a long and well-thought out development process. The result is a camera that has great benefits to a broad variety of users. You won't be disappointed.
comments powered by Disqus